Let’s do the time warp agaaaaaiinn!

That’s right – I STILL haven’t forgotten I have a blog. You’d think such a thing might slip a girl’s mind after moving across the country, starting two internships and mastering the public transportation system of the entire Bay Area…but nope. Not me. As Monty Python would say, I’m not dead yet.

But, I should probably back up a little bit. If not for you, then for future me who will read this post in five years and wonder what the hell I was doing in May 2012 that would prevent me from updating my blog for over a month.

I graduated from Converse College a year ago almost to the day with a Bachelor’s in English, a minor in music, a shiny tray proclaiming my knack for getting As, and a life plan. I still have all of those…except for that last one. That one fell apart within a matter of weeks.

Imma sum this up real quicklike, because even though you probably already know all this, it seems like it should be here: I planned (HA) to “work” (for free)  in a restaurant kitchen to get food prep experience necessary for culinary school, which I planned (haHA) to attend the following spring. As in, right now. Well, it sucked and I hated it. Plan B: go to grad school in Italy to become a licensed food nerd. 3 months of prepping for that before I realized….it sucked and I hated it. While I contemplated degree programs here in the US of A, I started an internship with Chefs Collaborative, a national non-profit dedicated to making restaurant kitchens more sustainable. It was awesome and I loved it. A lot. So much, in fact, that I decided to put grad school on the back burner and look into getting a job in the non-profit/sustainability world. I found an internship in Berkeley, CA with the Multinational Exchange for Sustainable Agriculture and it seemed to be the right step. The West Coast is really where the sustainable food movement started (love me some Alice Waters), so it just made sense that I move out there and see what kind of action was going on. [Side note: The East Coast is an amazing place to be for sustainable food too – there’s really a lot happening there, I just needed to not live at home/explore a new part of the country.]

So, here I am. Sitting at a borrowed desk in a rented room in North Berkeley, wondering why in the hell I ever thought I could make a plan for my post-grad activities and actually stick to it. Although, in my own defense, all my friends are where they thought they’d be a year later (grad school/South Africa with the Peace Corps…I have really cool friends.).

It’s been a wild and crazy two months. I guess that’s to be expected, though. Here’s what’s happened since my plane touched down.

1. I found someone who would actually pay me to do things. As someone on her sixth unpaid internship, this was a concept more exciting than words can explain. MONEY? FOR ME? YAY.

A few weeks before the move, my uncle suggested to me that I look into grant writing as a career. I had really never given it much thought before, but it does make a hell of a lotta sense: writing, for better or for worse, is my strongest talent, and I’m pretty determined to find work in the non-profit sector. So as I started looking for paid jobs in the Bay Area, I decided to see if there happened to be any grant writing internships around. Lo and behold, I found ONE grant writing internship (thank you Idealist) with a non-profit called WiserEarth in Sausalito. Three days after I moved into my room, I went into San Francisco to meet their Executive Director for an interview, and she offered it to me on the spot. I was pretty much over-the-moon excited about this. I started the very next Wednesday and haven’t looked back. I was absolutely shocked by how much I’ve loved the grant writing/development work, but I do. It’s been a perfect fit, and I am so relieved that I found this internship! I’ll do a dedicated post on Wiser and why it’s awesome, but in the meantime I highly suggest checking it out if you’ve never heard of it & joining if you’re into anything social justice/sustainability-related. Yes, shameless plugging, but I wouldn’t do it if I didn’t think it was awesome, and it realllllly is.

2. I started working with MESA.

Now, technically my internship with them started back in February; I’ve been doing a lot of work on their social media presence, which I something about which I learned SO MUCH with the Collaborative. I actually had no idea just how much I knew about the social media world until I went to a class/lecture in SF on driving traffic to your website, and knew more than their social media expert. The majority of the lecture was fascinating (SEO is such an interesting topic, I think), but I was rather disappointed during the discussion of social media when I found myself raising my hand to add information and clarify statements the presenter made. On the bright side though, I left feeling pretty positive about my own grasp of the topic. ANYWAY. I met them face-to-face, I go to the office once a week, I do things.

3. Sausalito is the least accessible place in the Bay Area. True story. 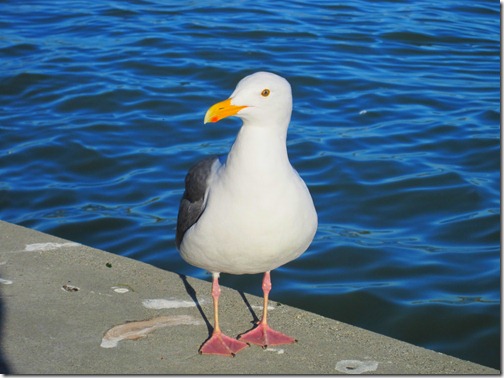 The WiserEarth office is in the beautiful town of Sausalito, just on the other side of the Golden Gate (in fact, it’s where my roommate & I went when we visited Cali last year!). It’s a lovely place to work. It’s an absolute crap place to get to without a car. BUT, my determination to making public transportation work for me came through, and I have the pleasure of a just-under-2-hour commute 3 days a week. Yes, it’s long, but it’s really not as bad as it sounds. When I got the internship, pretty much every single person I talked to said doing it without a car was impossible. Or stupid. Or both. WIMPS. I mean, no, it’s not ideal, but all I do is walk to the BART station [Bay Area Rapid Transit – underground trains], take the train into SF, then take a bus into Sausalito. It’s neither impossible nor stupid. Just…time-consuming. But I’m down with that. The sun is up by 6:30 now, when I get up, and I prep all my meals for the week on Friday & Saturday. It works.

I have experienced more culture shock here than I have with any of the 9 countries I have traveled to. I think a lot of it is because I wasn’t prepared for it, at least not to the extent to which I felt it, because it’s still in the US. Well, that may be true, but it sure as hell doesn’t feel like it to me. I’ve also never really had to deal with much culture shock; I know that sounds dumb/naïve, but I’ve traveled pretty extensively in my 22 years of life and the few times culture shock might have thrown me for a loop, I was so well-prepared for it it just…never hit me. But NOW I get it. Culture shock is a pain.

And if the Bay Area is a different culture, Berkeley is a different planet. Mostly in a good way; I don’t think I have ever seen so much diversity – and tolerance for it – in one place in my entire life. You really get a sense that everyone here is just themselves, and everyone else is okay with that. Now, I’m from not just from the Northeast. And I’m not just from New England. I’m from Boston, the only city in the world that gives NYC  and Paris a run for the snobby-center-of-the-universe attitude. You think you know snobby? HA. Spend 5 minutes in a room with a Harvard professor, and your definition will be shifted for life. The only exception to that test I’ve met is my father, and guess where he’s from? Yep: Bay Area, born and raised. So, I don’t really know what to do with people who actually smile at me with some genuine feeling. Sorry about that, west coast people. I’m working on it.

I am slowly adjusting to life in the Bay Area bubble. Adjusting to the time change – and making sure I translate everything to PST – was a lot easier than I expected. Adjusting to everything else…well, we all know I’m no good with transitions. Also I hate, hate, hate, HATE being without this every day: 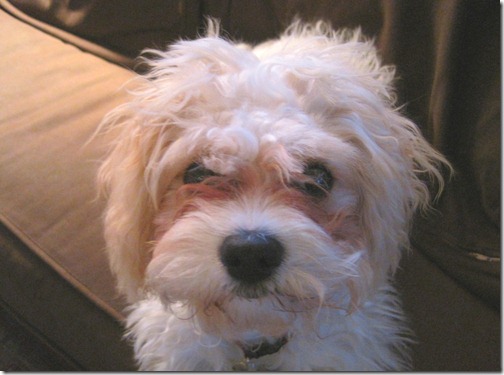 By far, that is my least favorite thing about this move. I miss her so much sometimes, it actually hurts.

Ok, ok, I know you want to hear allll about the amazing foodventures I’ve experienced. Um…sorry. Aside from discovering the tastebud fiesta that is Acme bread and enjoying the ease with which I can buy local food (living in the state that produces 80% of our nation’s food is pretty sweet), I’ve just been trying to keep my feet on the ground and my head in the right place.

I have multiple posts planned (yay!), and I know I say this all the time, but I really, really, realllllly am going to double my efforts to update at least once a week. I know I can fit it in to my schedule but above all, I REALLY need the writing practice. Writing is exactly like music, in that you should do it everyday to keep the muscle strong, and now that I’ve found myself work that heavily relies upon my writing not sucking, I have GOT to get more practice in. Even if it’s just rambling. (But I have quite a few cohesive post ideas with actual topics planned…so please bear with me!)

OH. And I’m moving. Again. To keep it short, the room I’m renting didn’t work out, so come this Friday I’ll be putting all my stuff into the Prius I use with City CarShare and moving into a new place. And then in another 2 months, I get to move again. Joy.

And that, dear readers, is my life on the West Coast. My next post: a day in the life. With pictures and everything.

Error: Twitter did not respond. Please wait a few minutes and refresh this page.